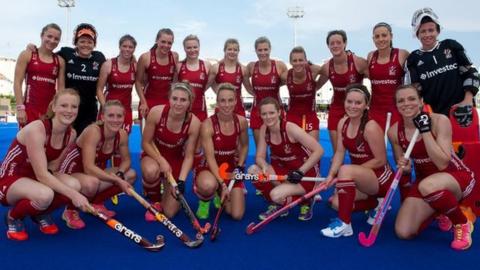 Great Britain guaranteed another Olympic medal as the women's hockey team reached their first final with a superb 3-0 win over New Zealand in Rio.

They face the Netherlands, who are aiming for a third straight Olympic gold, in Friday's final at 21:00 BST.

Team GB have won 50 medals in Rio, more than at any other overseas Olympics.

"To fight for an Olympic medal is what gets us up every morning, let alone to be in a gold medal match," said Britain defender Crista Cullen, who came out of retirement in 2015.

"We are hugely proud of where we have got."

Britain, coached by Danny Kerry, began the Games having slipped to seventh in the world rankings following a disappointing Champions Trophy in June.

But they were the only team to progress from the Olympic group stage with a 100% record, beating Argentina and Australia - ranked second and third in the world respectively - on their way to the quarter-finals, where they overcame Spain.

"They want nothing other than to take home gold. It has been incredible to watch.

"This changes the face of hockey, genuinely. To come on the Olympic stage and turn it on the way they have, with injuries, the strength, resilience, athleticism, maturity through this squad, has been a delight to watch."

Defence and Danson take Britain through

New Zealand, ranked fourth in the world, had the better opportunities in a goalless opening quarter.

However, Britain's leading scorer Danson opened the scoring when she prodded home, reacting quickest in a goalmouth scramble after the Black Sticks failed to clear a penalty corner.

Olivia Merry lashed wide for New Zealand before Susannah Townsend cleared off the goal-line as GB withstood pressure in the second and third quarters.

Failure to take those chances proved crucial as Britain scored two penalty strokes in the final quarter, despite losing Cullen and Georgie Twigg with head injuries.

Richardson-Walsh, taken out by Kayla Whitelock, flicked in to the keeper's right, and Danson converted from the spot after Lily Owsley was flattened by Liz Thompson.

Earlier, world number ones the Netherlands reached the final with a 4-3 shootout win over Germany after their semi-final finished 1-1.

They are aiming to become the first women's team to win three successive Olympic titles.

'Seven out of seven is not too shabby'

"They got chances but were never scoring and we were thinking that it was going to be our night."

GB head coach Danny Kerry: "What can I say? Seven games out of seven, not too shabby. The girls executed the game plan superbly. I am very, very proud of them all.

"But there's still one more game to go and they're going to keep their feet on the ground.

"I think the final will be a tight, cagey affair. The Netherlands have some talented players and they will probably start as red-hot favourites but we like it that way."

"I am speechless. You could see the sense of realisation on the girls' faces. Olympic finals do not come along like buses. They have earned their place in the final and everyone in the country should be proud of what they have done."

"From missing the opening ceremony for fear of standing up too long to imposing their own social media ban for the Games, this Great Britain side are focused to the core.

"That was evident as they soaked up pressure and took their chances expertly against a side higher in the global rankings.

"If rigid focus isn't enough to win gold, consider momentum. Along with a 100% record on the field, off the field Team GB's army of friends and family get louder and louder. You get the sense something special is happening.

"Team GB were flawless against New Zealand, but the Netherlands are the side everyone feared. Hitting an even higher level will be a necessity."