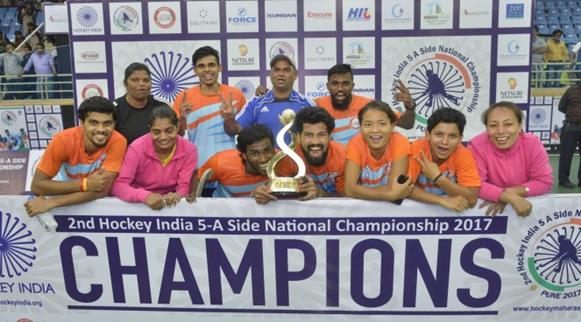 India recently paved the way for what may be considered as a possible sport changing opportunity for hockey as a whole. In the last few years we have witnessed the rise in sporting organisation s which fielded male sports breaking down their traditional practices to field a parallel women’s competition. The media have soaked up the opportunity to promote the new competitions as the world continues to address equity in sport and life.

Hockey has long had the advantage of being a female, male and family sport and as such a marketing goldmine. However this has not been capitalised upon in the past. The other factor which makes what India has done so commendable is that FIH approved Hockey 5s can address so many areas of promoting hockey participation for all ages and being an excitable alternative game format that has appeal to media and viewing spectators. Operating alongside traditional 11 a side hockey is the way to go. Touch Football in the southern hemisphere has for years successfully operating mixed competitions with great results. Smaller hockey associations have operated mixed junior hockey competitions. However this has been done as a response to low hockey participation numbers rather than a deliberately structured mixed competition.

India hockey has realised this but taken it one step further in creating gender equity opportunities. A recent article by FIH spells out the successful outcomes of their initiative.

While hockey is one of the fore-runners among Olympic sports when it comes to gender equality, the drive for equal opportunities within the sport has taken another step forwards with an exciting initiative from Hockey India. Recently in the city of Pune, the second Hockey India 5-a-side National Championship (men and women) 2017 took place at the Shiv Chhatrapati sports complex in Balewadi.

What is so ground breaking about this event is that the teams are mixed gender, with teams of nine players – five men and four women – with at least two women always on the pitch at any time. In the final, it was the hosts Hockey Maharashtra who held their nerve to beat Hockey Karnataka 4-3. The final was a big draw with spectators turning up in big numbers to cheer their team to victory.

For the spectators, this was a great chance to see national heroes in action and at close quarters. Among those taking part and fresh from their gold medal win at the Asia Cup, top players such as Rani Rampal, Savita Rani and Gurpreet Kaur were all starring in the competition.

Talking to The Times of India newspaper, the General Secretary of Hockey India, Manoj Bhore, said one of the aims was to pitch the event for the 2024 Olympic Games. “Since many individual sports like tennis, shooting and badminton have been attaining gender equality at the Olympic Games, we at Hockey India thought of bringing a concept that is faster and will fulfil the equality criteria,” said Bhore. Observers were on hand from the IOC to see how the event works, while the International Hockey Federation (FIH) was also keen to see how the format plays out.

The event, which was a huge success in its inaugural year, was developed following initial discussions between FIH President Dr Narinder Dhruv Batra and the International Olympic Committee (IOC) President Thomas Bach.

The mixed event was a precursor to the men’s and women’s National 5-a-side league and was streamed live on the Hockey India Facebook page and YouTube Live, taking the sport to millions more fans across the world.

The National Championships in Pune are a fantastic example of a National Association are fulfilling one the aims of the FIH Hockey Revolution, to achieve total gender parity on and off the field.

Let’s all get on the bandwagon and follow this initiative – mixed hockey 5’s – Love it !