World number two Australia are grouped against India (world number six), Germany (five) and England (seven) in Pool B of the eight-nation tournament which runs from 1-10 December.

Captain Mark Knowles is one of a number of experienced players who return after being given the opportunity to freshen up as Australia won the International Festival of Hockey (IFOH) in Melbourne last week.

Kookaburras Head Coach Colin Batch said: “Selection is always difficult, we have a very competitive squad, we view the World League Final as an opportunity to learn how our players handle the pressure that an eight-team tournament brings.

“We’re pleased to welcome back a number of players who we gave the opportunity to freshen up during the International Festival of Hockey with a view to being in prime condition for the World League Final.

“We’re optimistic we’ll see positive results from giving them that opportunity to refresh before we take on some of the best teams in the world.” 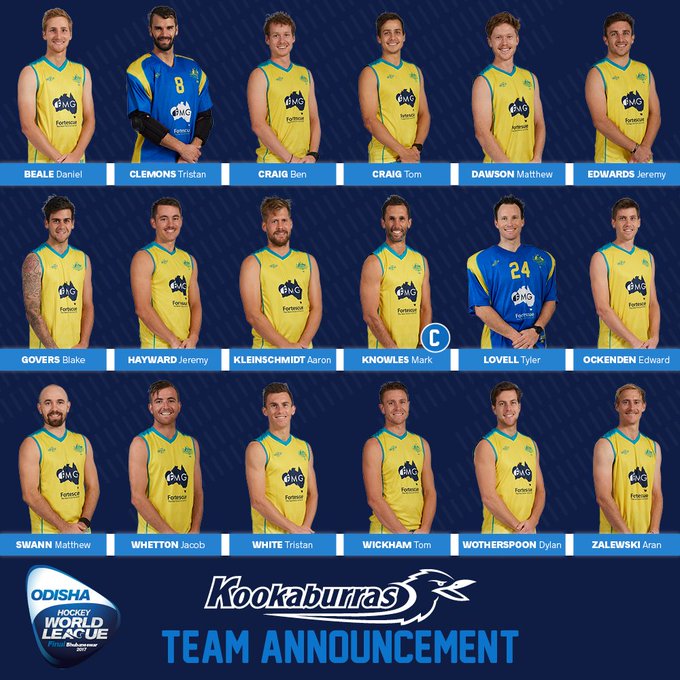 Here's our team for the @FIH_Hockey World League Final with the skipper @knowlesy09 among those to return!
...
Story > http://www.hockey.org.au/News/kookaburras-world-league-final-team-announced …

Forward Trent Mitton, who missed the IFOH, is also unavailable after undergoing surgery on a fractured thumb a fortnight ago.

The World League Final will be Australia’s final tournament of 2017 ahead of a big year where the Kookaburras will compete at the 2018 Commonwealth Games and 2018 World Cup.

Argentina (one), Belgium (three), the Netherlands (four) and Spain (nine) are in Pool A at the World League Final.

Batch said: “This is a good opportunity to play against European teams and to test where we’re at after a lot of changes this year in the squad.

“We’ve not played against Argentina and the Netherlands for a while and we’ve not played Germany this year either, so that’s why this is a valuable tournament for us.”

Speaking about Australia’s ambition at the World League Final, Batch added: “It’s no different to any other tournament where we go to perform to our best.

“We’re also assessing players in their capacity to play against the other top nations in the world.

“We always go out there to win every game we play, so nothing changes.”

The Kookaburras will fly out for India on Saturday 25 November.